I usually don’t deal with political issues on my website, Seasoned You. Both here and on the coordinating Facebook page, I write about aging gracefully, spiritual motivation, health and survival tips, and books.  But after watching the third televised funeral of a Black man who was murdered by police in less than a month, I feel that I have to join in with the chorus in singing, “I Can’t Breathe.”   You see, I am the mother of four sons. We gave them "the talk" and prayed for their safety as they ventured out into the world.  They are all adults now, but still, things can happen. And recent events show that there is no limit on age or gender for police attacks against Black people.

“And there was no air,” is a line from the play For Colored Girls Who Have Considered Suicide when the Rainbow is Enuf by Ntosake Shange, written in 1982. As a metaphor, it voices that feeling of desperation that we feel when life is strangling us. It was the literal case in the 2014 murder of Eric Garner, whose final words were “I Can’t Breathe,” as the police continued to suffocate him, and again on May 25, 2020, when a police officer kept his knee and full body weight on the neck of George Floyd for 8.46 minutes as he struggled to say, “I can’t breathe,” once again.  His colleagues stood by guarding him, ready to attack anyone that might try to save the man on the ground. Later, we watched an actual murder over and over again on television and on Facebook.The deaths of both men by corrupt police sparked protests around the world by people of all races and nationalities, as well as riots and demands for justice and police reform.   Artists paid tribute with amazing murals in cities all over the US and the world.  The one above was painted by Eme Freethinker in Berlin's Mauerpark. 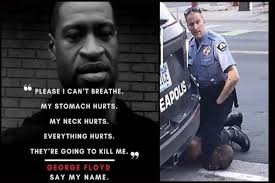 Of course racial profiling, police brutality, and the failure of the justice system to punish police for their actions have been with us for years, extending back to slavery when they were called overseers.  On the rare occasions that whites were tried for beating or killing a Black person in the 50s, 60, 70s, 80s or even 90s, (the Rodney King case), they were not expected to be convicted, especially if they were on the force. They were just “doing their job”. And as we know, all-white juries defended their all-white neighbors, especially in the South. What is different now is the universal accessibility of the cell phone. So as police continue to attack unarmed Black men and women in the streets, bystanders are recording the whole thing. These scenes are going viral on Facebook and Twitter before the police can file a report. In some cases, those caught filming are arrested and jailed, and many cities are trying to make it illegal to record the police. The latest attempts at justice have brought about laws requiring police to wear body cams and use dashboard cameras, but often these are ignored or “dysfunctional” at the time of an incident, or departments say they can't afford them.  Even when available, many forces refuse to share the footage, supporting the “blue code” that police live by, to defend each other at all costs. That means, don’t tell what you saw and don’t interfere with the actions of a fellow officer. And sometimes, the police and those who protect them are Black. But the “blue brotherhood” must be protected above all else.

But it’s hard to deny the truth when time and time again, we see police attacking Black people. And it’s not always someone who is suspected of a crime. It’s not even always in the street. Look at the case of Botham Jean, murdered in his own home in Dallas in 2018 when former officer Amber Guyger supposedly thought she was in her own apartment and just started shooting. Or Aaron Dean, who went to the home of Atatiana Jefferson in Fort Worth in 2019 on a wellness check, and instead of knocking on the front door and identifying himself, he peered into a window and started shooting, killing her.  In February 2020, a retired police officer and his son murdered Ahmaud Arberry while he was jogging.  Less than a month later, Breonna Taylor, an aspiring nurse in Louisville, was murdered in the middle of the night during a police raid on the wrong apartment. And then there’s George Floyd in May 2020, and Rayshard Brooks, shot in the back this June, as he tried to escape a taser. It is all so exhausting. No wonder we can’t breathe. A few days after he paid for his funeral, Tyler Perry delivered a speech on the death of George Floyd and how his story is the common fear of  Black men in America.. He discusses "the talk" that every Black parent must have with his child. The speech lasted eight minutes and forty-six seconds, the same amount of time the officer who killed Floyd had his knee on his neck.  Imagine that as you listen.

The BLACK LIVES MATTER movement gained momentum again as protests burgeoned around the world.  Most of the protests were peaceful, but some escalated into riots and looting, an all-too familiar result when people just can’t breathe. Social media posted pictures of whites as well as Blacks fanning the flames, but we couldn’t always tell if they were as angry as the Black community, just wanted some free stuff, or if they were escalating a race war assuming “Black thugs” would be blamed. The President responded to the peaceful protest in D.C. by ordering armed troops with tear gas and rubber bullets, and building a fence around the White House. After his photo op with a Bible, he went into a bunker.

While many Anglo citizens are against police brutality, and claim they just didn’t know things were that bad, others respond with the comeback, "but all lives matter,” as if Black people should not be singled out to be saved. To them, it’s a way of saying that they don’t see race and we should all stop harping on it. But several pastors, both Black and white, have responded with the parable of the lost sheep, when Jesus tells the story of the shepherd who left ninety-nine sheep to save the one who was lost from the flock.

12 “What do you think? If a man owns a hundred sheep, and one of them wanders away, will he not leave the ninety-nine on the hills and go to look for the one that wandered off?

Sometimes, you have to save the child who is in danger when the rest can fend for themselves.   Below is a list of just some of the names of Black people killed by police since 2014.  They could not be saved. 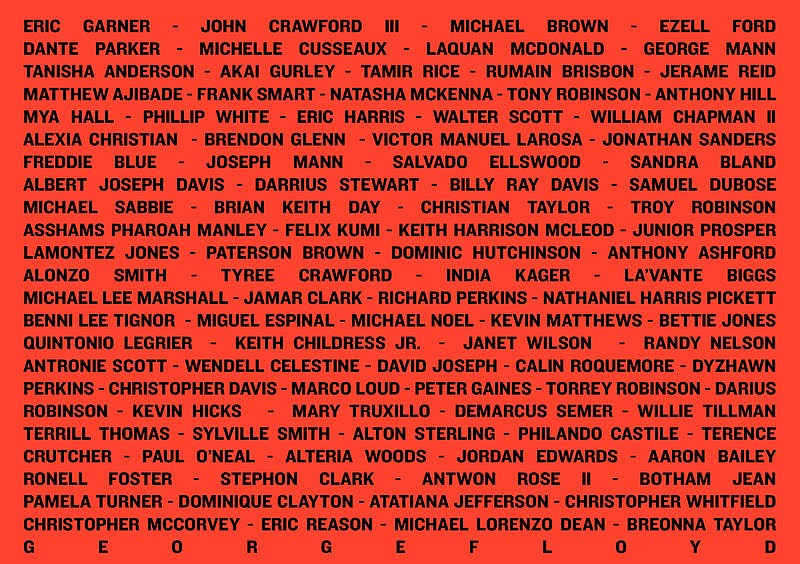 The BLACK LIVES MATTER movement is not about saying Black life is more important or more valuable than white life.  For the most part, whites are not in danger of being killed by police unless they are caught committing a violent crime.  Even mass shooters have been arrested and taken to jail under protective custody unless they turned a gun on themselves.  If they are shot, they are wounded and taken to a hospital where they are treated and guarded, then later they are granted a lawyer and a  trial. But if the suspect is Black, even if the officers are not sure that they have the right person or even the right house, the response is “shoot to kill” or worse, let them know who is boss and let them suffer a slow death. I know policemen are trained to be excellent marksmen, that the objective is to disable a shooter and take him in.  But why is it that with Blacks, even unarmed Blacks, even with hands up, the policy is "shoot to kill"?

Still, there are those who defend the police no matter what, joking about “knee on the neck” challenges with their children on Facebook. There are those, like Donald Trump, who see all police as “good people,” offer to turn a blind eye to even more abuse, and call out the military troops on peaceful protesters. And of course not all cops are bad cops. But there are "good cops" all over the country who are defending their murderous colleagues with their silence and threatening to quit because they “can’t do their jobs”. I say let them. If they don’t want to be held accountable to the laws they were hired to enforce, then they should not be on the force.  None of these heinous acts by police followed protocol, but they were customary and accepted by the departments themselves. At least with this worldwide attention, police policy is changing. At least now, police are being charged and more will be convicted. And when they get to prison, they will face the same fear, the same anxiety, the same “I can’t breathe” feeling, that Black men face every day:  What if I never make it home? 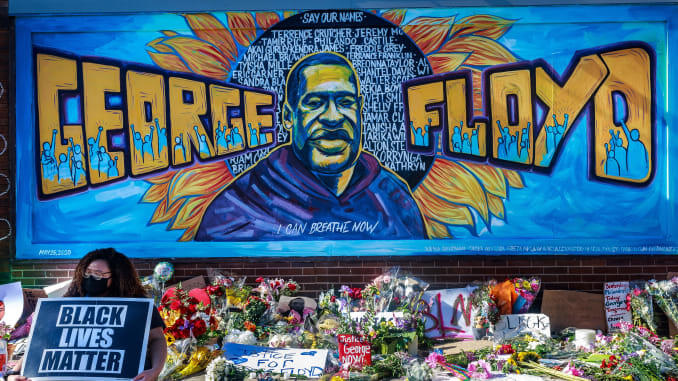 "I Can Breathe Now,"Memorial mural and flowers in Minneapolis where George Floyd was killed. It wa painted by Greta McLain, Xena Goldman and Cadex Herrera.